I have thought for some time that the Voynich script has aspects of featuralism. That is, the shape of a character is not wholly arbitrary but in some way related to the sound it represents. Similarly shaped parts of different characters may thus represent similar parts of sound.

A very basic example of featuralism is found in Latvian, where all the vowels come in long and short pairs. Short vowels are written with plain characters (a, e, i, u) and the corresponding long vowels with the same characters plus a small bar (a macron) over the top (ā, ē, ī, ū). The bar, or its absence, thus represents the length of a vowel as a feature rather than a whole sound. Hangul, the script used to write Korean, has even more extensive featuralism. Several characters are made by doubling or combining others in ways which consistently represent the same relationships between the starting characters and the result.

I do not think that the Voynich script is thoroughly featural, in that every stroke represents a part of a sound and the characters are simply bundles of stroke representing the bundles of features which make up a sound. I do not know if any featural script goes so far. But I do think that some aspects of featuralism may be present in the script, and here wish to look at one group in particular: the gallows characters.

The gallows characters are a group of eight symbols [k, t, f, p, ckh, cth, cfh, cph] which have a few shared aspects. Namely: 1) they all have a long straight left “leg” which extends the full height of the line; 2) a stroke links this leg to a loop at the right hand side, and 3) they all occur in roughly the same word environments. There are also a few seldom seen characters which look very similar, but only these eight occur in any number. Hence the focus on these eight characters alone.

The diagram below shows the characters mapped onto the three features: 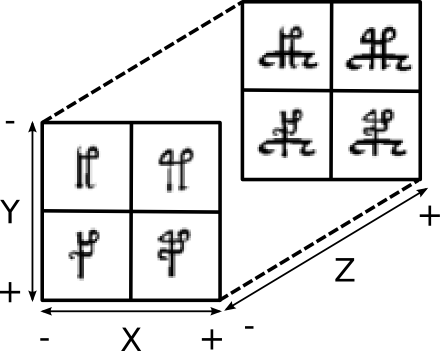 The diagram is labelled X, Y, Z, to show the three features, with a + or – for presence or absence: X for left loop, Y for bent leg, and Z for bench. Movement along any axis implies the switch of that feature from present to absent (or vice versa), while the presence or absence of the other two features keeps the same. Each of the gallows can be referred to by its XYZ coordinates, so that [k] is -,-,-, [p] is +,+,-, [cfh] is -,+,+, and so on.

We can also begin to think of the feature groups themselves in the abstract, and consider how they affect the characters in the text. This is what we will look at now.

The gallows characters differ in frequency quite substantially. The most common [k] occurs nearly 10,000 times, while the least common [cfh] only about 80. All the features seem to have some impact on how often a character occurs. Below is a list of the eight characters by frequency (approximately):

The distribution of gallows characters also has some interesting variations by features. The presence of Feature Y is much more likely on the first line of a paragraph, and Feature X more likely as the first character in a paragraph. These two observations have been extensively discussed.

The environment of a gallows character is somewhat influenced by the presence of absence of features. We noted above that all the eight gallows characters have similar word environments (that it, where they appear within words), but there are some sharp differences.

The presence of Feature Y, the bent leg, along with the absence of Feature Z, the bench, means that the character almost never appears before [e], but more commonly before [ch, sh]. The feature also makes it more likely that the gallows will appear at the beginning of a word.

The presence of Feature Z means that the character almost never appears before [ch, sh], but much more likely that the gallows will appear after those two characters. The feature also has an overall tendency to be more common at the beginning of words, though this is not wholly consistent. The absence of Feature Z has a higher instance of [o, y] immediately before.

The presence or absence of Feature X, the right loop, seems to make no great difference to word environment. The biggest differences come in the added presence of Feature Z, where X causes the gallows to be more common word initially, but still with significant occurrences in the same environments. There seems to be a certain level of replaceability with Feature X, where the gallows with and without this feature can appear in the same place quite happily.

A lot more work could be done to look at the differences between these different features, but I think this three feature breakdown of gallows characters will prove to be both interesting and useful. It unifies observed differences into a single system, hopefully modelling how the inventor of the Voynich script might have seen it.

Without more work it is hard to draw any firm conclusions about what each feature may mean. My hunch is that Feature X is the most significant of the three features, but for now the argument is more impressionistic than reasoned.