The existence of line patterns in the Voynich Manuscript stands as a stumbling block for linguistic attempts to explain the text. For how can the container of a text alter its properties? I believe the answer may spring from the nature of a language as it takes its first baby steps into literacy.

Though we might expect certain differences at the beginning and ends of paragraphs or sentences, due to possible patterns in sound or meaning at these points, we should not expect such a thing to occur on lines. For a line is an artifact of the text as written down, and it is not a linguistic fact in itself. Characteristics based on the line recur according to the width of the parchment, and should that width shrink or grow, so too must the interval of the characteristics. The same goes where a drawing causes the line length to be shorter.

One characteristic of line patterns is the appearance of word–ending [m], which occurs often (though not exclusively) at the end of lines. On the side f17v there are five words ending in [m], four of which occur at the end of a line. However, the plant drawing extends the whole height of one side causing the lines to be significantly shorter than on many other pages. A even better example is f40v, where once again four of five word–ending [m] are at the end of a line. Two of them occur in a paragraph which is significantly shortened by the presence of a drawing, while the other two are in a paragraph which runs the full width of the page. On f54v there are five (out of eleven) occurrences at all different widths due to a raked end of line.

No matter where the end of line occurs, the line pattern effects occur with it. It is not preplanned. The process which creates the effects must lie within the text, but somehow be dynamic according to the container of the text. It is almost as though the line break itself causes the change, and this is what I wish to argue. But how can this be? Let us look at the line and the effect separately to see if some answer can be found.

The first texts were spoken. Songs and poems, epic stories, ritual words, and so on. We can think of them as texts, rather than just speech, as they were composed and repeatable. They differed from utterances which were made for the occasion and could be chosen by the speaker. But they were similar in being both spoken and heard, made from speech sounds and interpreted as such.

Spoken texts were often structured with phrases, pauses, stops, stress, and any number of other features common to speech and which could be heard as distinct features. Yet this prosody does not consist of speech sounds as we commonly think of them, and is often inadequately captured by the bare 26 letters (or however many) of the alphabet. Today we use a range of punctuation to convey some of these characteristics of speech, such as full stops, commas, semicolons, and question marks, while being painfully aware—notoriously in the use of irony—that our script is not up to the job.

For those written texts strongly governed by stress or number of syllables, we also use the layout of the text on the page to help us. The lines of a poem, or of a play, are displayed in their meter. Each new line on the page is a new line of poetry. It is so common in European languages that this is how poetry ‘looks’: you don’t even need to understand a language to identify poetry. Here, at the very least, the line is a thing in itself.

Yet punctuation and specific layout of a text are developments which came later—hundreds or even thousands of years later—than writing itself. If we look at the lines of Beowulf, the epic of Old English poetry, we can see lines (and a mid line break known as a caesura) which are important to understanding the rhythm of the spoken poem:

And Beowulf certainly was spoken, or performed in some manner, in its original form. The written version we have is just a copy, a deposit of the words for safekeeping, not the actual poem itself. The expectation was that anybody reading the text would already have heard the poem, understand how it was performed, and know the text was not the whole story. Indeed, the original written text doesn’t look like a poem at all: 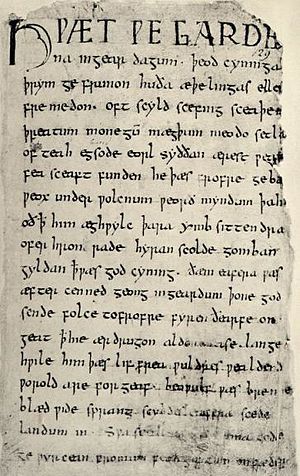 There are no poetic lines, no breaks, no gaps for pauses (there is a little punctuation, however). Just a series of words to which the reader would bring their own knowledge of the poem to make into the whole work. Romans wrote their literature in a similar but even more extreme form: scriptio continua, where even the gaps between words were left out. Again, the reader and writing together make up the text with the reader supplying whatever the writing lacked. And far from being primitive or simply a stepping stone to modern writing, it is actually both later than the use of word division using gaps and still the norm for some languages today.

The relationship between the written and the spoken is often not straightforward. Modern assumptions about what written texts should be like have developed over many years and are not the only ones possible. How a language is written on the page is the outcome of many choices made by many people, and not always made wittingly. The meaning of a line in the Voynich Manuscript cannot be taken for granted.

Prosody is not the only feature of speech often poorly represented in writing. One sound can effect a change in a nearby sound, such as with the process called sandhi. It can happen in lots of places and in lots of ways, and can sometimes be seen in writing. For example, in English the word a becomes an before a vowel: a bird but an apple. The English language wants us to insert an /n/ to make two words easier to pronounce together, rather than have two vowels in a row.

You might protest that sandhi can’t be exactly unrepresented when there is a great big example at the heart of English! But in truth that’s about all there is in written English. A similar sandhi effect happens in some dialects where two vowels—at the end of one word and the beginning of the following—have an /r/ inserted between them. Known as intrusive–r, it makes a phrase such as “law and order” sound like “lawr and order”. It has become quite common, yet is not represented in standard writing. If ever written it is considered an error, the fault of the writer for not knowing that the /r/ isn’t meant to be there, even though it is spoken.

The interesting thing about sandhi effects is that they don’t happen if the person speaking leaves a gap or pause in their speech. The pause, however slight, which we leave at the end of a sentence is enough to stop the effects from taking place. The phrase, “I studied law in England where I live” would typically have an /r/ inserted after law (and after where, the final /r/ of this word not usually being pronounced in such dialects). Yet, if we break up the phrase in two, “I studied law. In England where I live…” there would be no /r/ sound inserted after law.

You’ve likely already guessed where this is going, so I will get right to the point. The language of the Voynich Manuscript may have had several kinds of sandhi working on the sounds of the spoken language, and the transition to writing may have made the presence of pauses ambiguous due to the unfamiliar nature of page layout. I believe these may account for line patterns in one of  two ways:

I think the first scenario is unlikely. It requires the text to be shot through with sandhi effects, when we know it is actually pretty regular, and the writer to consider the line break a real pause.

The second scenario is more realistic. The main body of the text is regular and any sandhi is provided by the reader. The line break is not a real pause but a source of worry for the writer. Here he makes the sandhi explicit, consciously altering the end of the last words and the beginning of first words, so that the reader will get it right.

And so, this is my hypothesis for the existence of line patterns. It is neither pretty nor wholly obvious. But it provides a linguistic solution to a knotty problem.

Afterword: I am not happy with the final state of this article. It does not present all my thoughts in the way I would like. I have found it hard to reach and explain what I have in mind. But this is the nearest I have gotten in several months of working to write this down. I may change the article in the future to make things clearer, but the heart of the proposal will not change.

Edit in 2019: Although I still credit Prescott Currier with discovering some key aspects of line patterns I have rejected his terminology. I believe that “line as a functional unit” is a misleading and premature judgement for something we don’t yet understand. I have therefore removed that terminology from this and other posts. I now prefer “line patterns” as the neutral way to describe what we see.